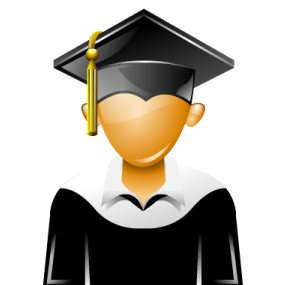 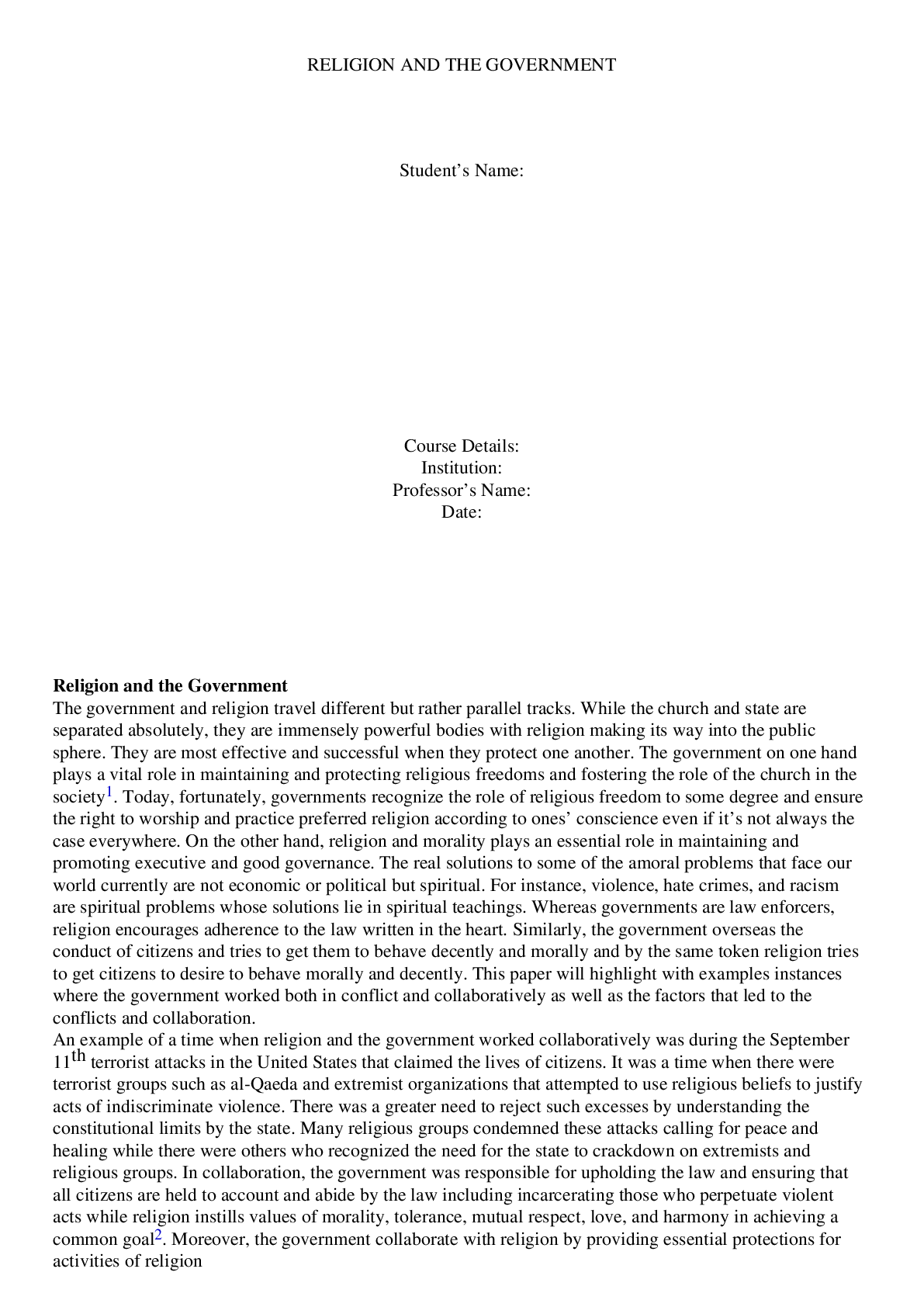 Religion and the Government In a 5 page essay find an example of a time when religion and government worked cooperatively and an example where religion and government were in conflict. Analyze the two examples and explain why in each situation the factors led to either cooperation or conflict. BE SURE THAT examples of both cooperation and conflict between religion and government are thoroughly addressed with substantive supporting information. Analysis of the factors that led to cooperation or conflict is thorough and explained in sufficient detail. Lastly BE SURE THAT thesis and/or main claim are comprehensive. The essence of the paper is contained within the thesis. Thesis statement makes the purpose of the paper clear.PLEASE FOLLOW ALL STEPS. In addition, please be sure to use the proper Chicago style citation and bibliography. Be sure that the page numbers where information was taken (from books, journals, etc), to write the paper, is present for the footnotes and bibliography, ONLY USE 2 Primary SOURCES and 4 SECONDARY SOURCES. NO Tertiary sources, no website sources, or blogs!!!
Assignment Solution $15
0
3 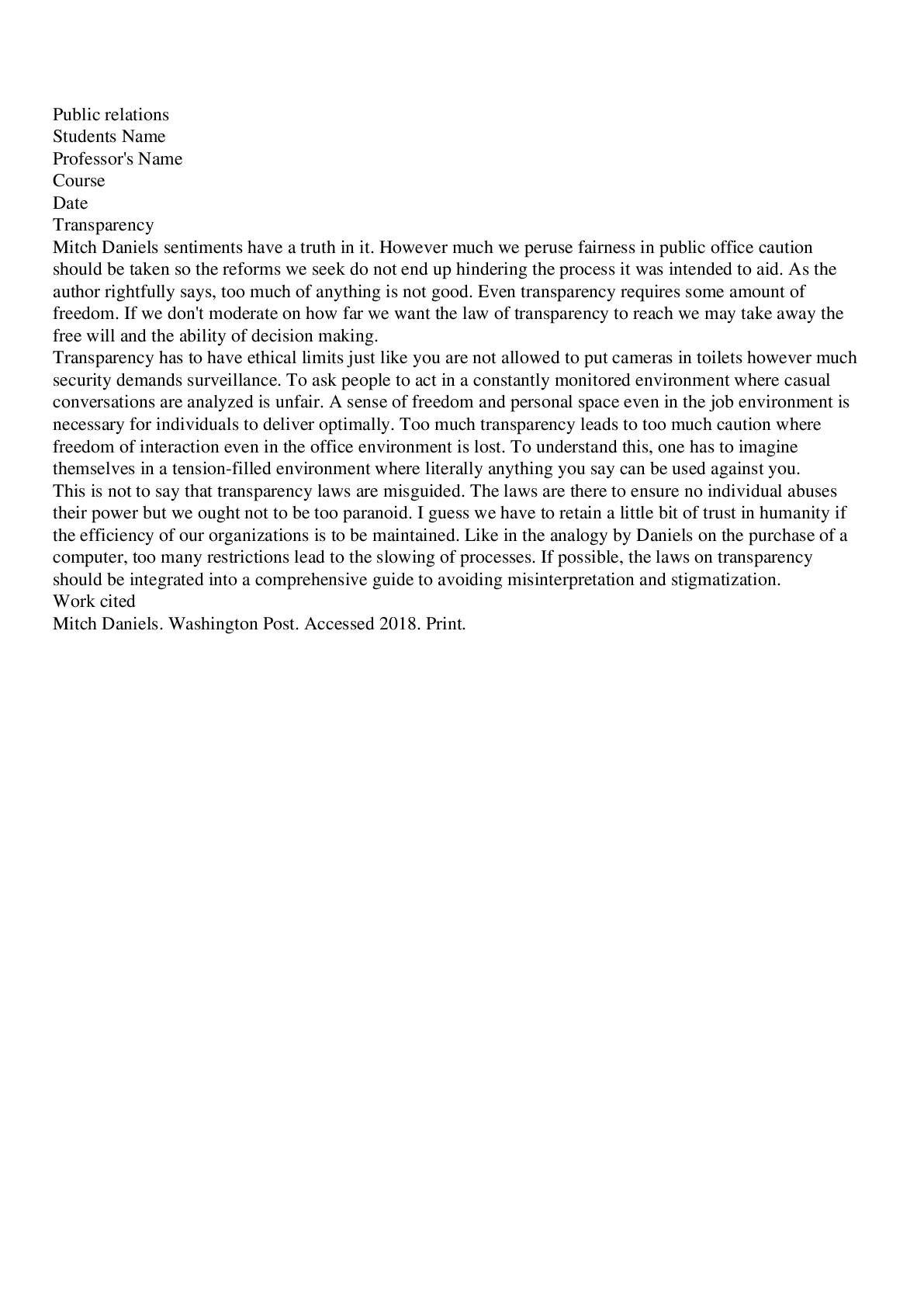 Transparency SSIGNMENT DUE THURSDAY MORNING...THANK YOUFrom the Washington Post, by Mitch Daniels:Dave Eggers’s 2013 novel “The Circle” depicts a world where demands for “openness” annihilate privacy and personal autonomy, creating a dystopian nightmare. Public officials in the tale try to outdo each other in going “clear” by wearing body cameras and microphones every waking moment. For most readers, the book is farfetched science fiction, but for those active in public life, Eggers’s conception doesn’t seem all that implausible.It’s hard to determine when too much of a good thing becomes truly too much. And the more laudable the goal, the harder it generally is to reel in the excess, because any suggested retrenchment is viewed as an abandonment of the goal itself. At the risk of being misconstrued, I venture the heretical thought that we have overshot in the pursuit of governmental “openness” and “transparency.”There’s no question that American government at all levels is better off for the open-door and open-record reforms of the past half-century. Knowing that the public is watching, public officials generally behave more responsibly in the conduct of their duties.I’m a true believer. As the director of the Office of Management and Budget in the early 2000s, I worked in perhaps surprising collaboration with Ralph Nader to open the federal government’s contracting process to broader public inspection. During my service in Indiana as governor from 2005 to 2013, we made similar changes as a part of wider ethics reforms.But even water has a fatal dosage level. Too much exercise can be unhealthy. Attempts to eliminate almost all forms of confidential interaction in government come with downsides.We’ve seen the unintended consequences of overzealous reform before. Badly needed civil service and procurement reforms initially worked, but they expanded over time until they paralyzed the federal government to a comical degree. Federal employees are in greater danger from a lightning strike than termination for lousy performance, and the procedures for buying, say, a new computer are so byzantine that the machines are outdated by the time they arrive.The current obsession with transparency is starting to take a similar toll. In a host of ways, government has been rendered less nimble, less talented and less effective.Honest people are now compelled to become scofflaws in the good-faith pursuit of their duties. Under “open meeting” requirements forbidding members of governing bodies to confer privately, the result is furtive hallway conversations or “executive committee” meetings where the discussion might not technically fall into the category of exemptions that permit such meetings.Open-records laws have had the same effect. Government took a serious wrong turn at the dawn of the email era when somebody decided that these online exchanges are “documents.” Every emailer knows that, perhaps apart from attachments, they are conversations.I’m rarely on a conference call with other public university presidents that doesn’t include someone reminding the group: “No emails!” Even the most deliberative of discussions is vulnerable to later being spread across a newspaper front page.In sarcastic moments, I sometimes point out the gaping loophole in our public-records laws: Public officials are talking on the phone, and we don’t know what they’re saying! Clearly, we need a wiretap on every government line and, while we’re at it, their home and cellphones. And we’ll need surveillance cameras because, next thing you know, they’ll switch to speaking in person!Overall capability in government suffers, too. The excessive background checks and disclosure demands of today’s federal employment discourage countless talented people from serving. I watched the number and quality of aspirants to Indiana state judgeships decline over the years. Like many other states, Indiana requires the immediate public identification of interested judicial candidates, and far too many outstanding lawyers, worried about angering their law firms, clients or employers, stay on the sidelines.Maybe the worst net negative effect of the openness obsession is on the spirit of compromise — a spirit that is prized, ironically, by many transparency advocates. There is a reason the Constitutional Convention of 1787 was held privately and no official minutes were kept. Men who argued fiercely against certain provisions preserved their ability to accept second-best outcomes, and to go home and advocate ratification of the overall agreement.None of this is to suggest a major rollback; we are better off for the sunshine. But for the best of reasons, “transparency” has risen to sacred status, and even moderate change will be difficult. A news media accustomed to rummaging through email records and visitor logs may be especially unsympathetic. Still, it’s time for us all to consider broadening the definitions of what communications should remain confidential and to grant more leeway for the kinds of meetings that are often essential to producing workable compromises.I hope I’ve made myself . . . clear.
Assignment Solution $3
0
3 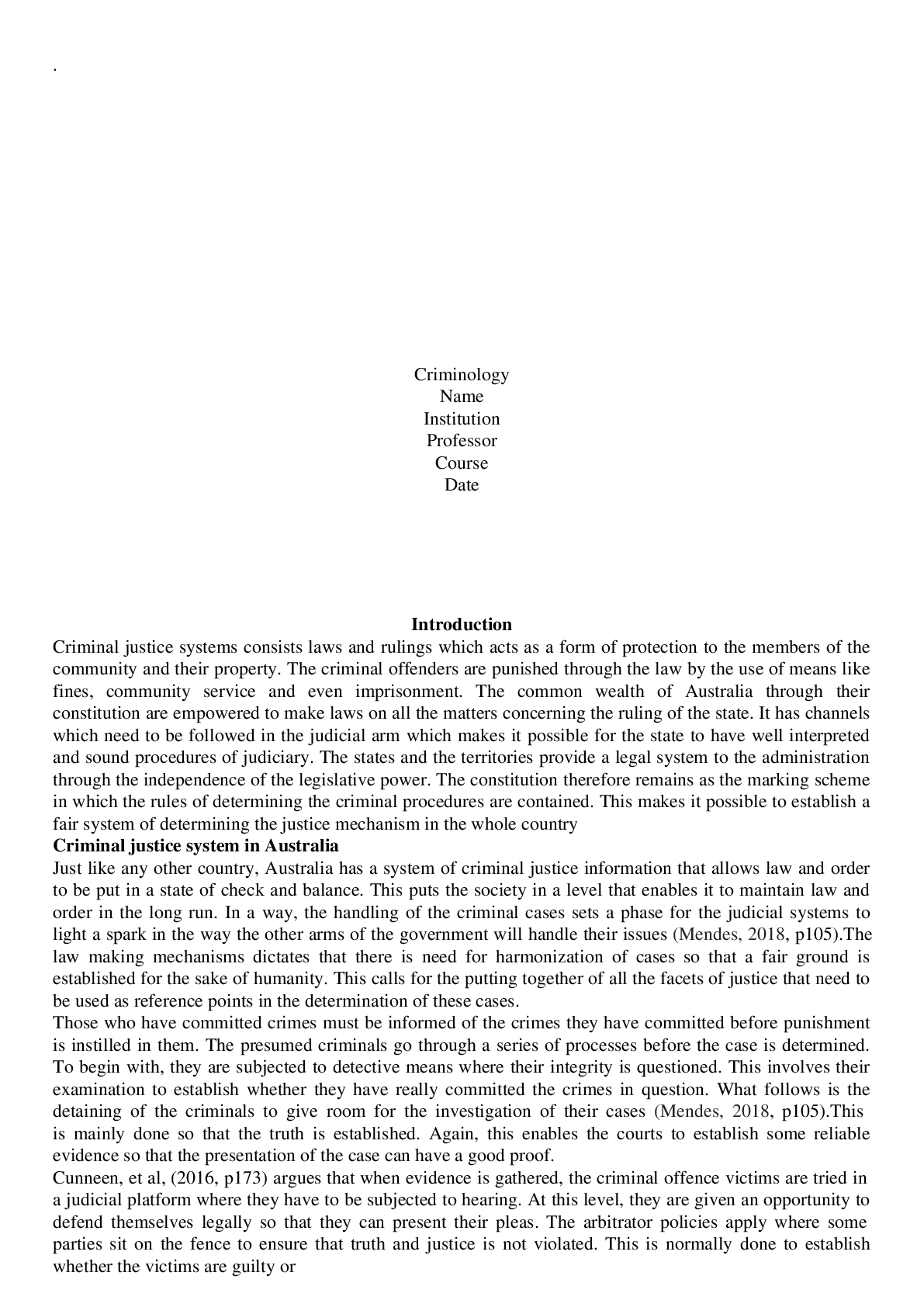 Criminology It is a research essay&nbsp;1st – the term critically assess has an existing definition in the field that you need to locate and use as a part of your essay. This definition should not be explicitly included in your essay, but it should be used to inform the you answer the question.2nd – Formulate argument- When answering this question, you should formulate your argument around the phrase ‘co-constitution’. This means that your answer to the question should clearly express how the representation of crime and lived experience of crime constitute (or con-construct) one another.3rd Define the reader- when writing your argument be sure to specifically define for the reader what representations, ‘criminal justice problems’ and ‘lived experiences’ you will be exploring in your essay.This means that you need to choose specific representations for example in film, advertisements, facebook posts, to analyze, and then you need to relate this to specific criminal justice problems for example police brutality, domestic violence deaths, and lived experiences( for example , ethnography with victims of police brutality, family members of domestic violence victims, etc.&nbsp;The essay needs to talk from two of these criminological concepts as well.Criminology of the skin&nbsp;Criminalisation of rebellion&nbsp;Commodification of rebellion&nbsp;The media, Consumerism and CrimeFrom the Spectacle of hyper reality&nbsp;Mass Media and the News&nbsp;Be word processed, use 12 point font and be double spaced. You are free to choose your font style, but make sure it is legible;Adopt a fluent and scholarly writing style;It would be appropriate, though not necessary, to use headings to signal the way you will direct your analysis and discussion;Support viewpoints with reasoned argument, substantiated by relevant theoretical material and research evidence; andUse in-text citations and referencing conventions as outlined in the WSU Harvard Referencing Guide.
Essay $14
0
2
Statistics
Sales 0
Reputation (4938) Gold
Last item sold8 hours ago
Reviews (0)